Our bellies and the fate of our planet are inextricably tied to the guts of ruminants. As they breakdown grass and cellulose in their feed, ruminants belch out methane - enough to visibly fill an inflatable backpack during one sitting. Ruminant animal products like milk, meat, wool, and leather are essential livelihoods and sources of sustenance for much of the world - who don’t have vegan alternatives access because of income or supply chain limitations.

Meanwhile, methane is having a moment. No longer able to pass as “the other greenhouse gas” methane’s in the hot seat and accountable for its 84x greater potency vs CO2 in its first two decades, and contribution to >25% of current warming. The race is on to slash methane emissions by 30% by the end of the decade via the Global Methane Pledge, signed by 100 developed and developing countries, which could immediately reduce warming by >0.2°C by 2050.

Compared to the haystack of distributed sources of CO2 emissions, CH4 accounting pencils out a much simpler story. All fingers point to agriculture as the largest source of anthropogenic methane emissions, with oil & gas production a close second (remember our O&G methane feature with Crusoe Energy?) Cow burping alone makes up a whopping ~30% of methane emissions, or ~10% of global GHG emission!

But to cut cows some slack, not all methane emissions are created equal. Cows release biogenic methane which is part of the natural biogenic carbon cycle:

The carbon that the plant initially captured from the atmosphere is the same carbon that eventually gets released back when the methane is converted. It’s recycled carbon. Meanwhile, fossil-based methane is new warming dug up from old dino bones and pumped into the atmosphere and oceans. Therefore, reducing biogenic methane could create a net cooling effect by destroying more methane than gets emitted.

Ever considered how the rumen works? It’s quite magical. Enteric fermentation is a highly evolved process that allows ruminants (cattle, buffalo, sheep, goats, etc.) to digest cellulose, the basic component of plant cell walls. Rumen microbes ferment simple and complex carbohydrates like cellulose to produce volatile fatty acids (VFAs), which satisfy ~70% of the animal’s energy requirements. The rub comes when the production of certain VFAs also produces hydrogen (H2), which methanogens then convert to CH4. Cellulose in, CH4 out.

Humans have tried their hand at optimizing livestock productivity and bottom-lines for millenia, long before we felt guilty about methane’s global warming impacts. It turns out that reducing cow’s belchiness generally increases their productivity. Call it a win-win. Legacy enteric fermentation abatement approaches mostly work indirectly via decreasing emission intensity by increasing animals’ efficiency of time to output. Consider a super-ruminant that pumps out milk at lightning speed - it’s considerably cheaper to raise, and conveniently produces less CH4. Increased productivity means fewer animals, which means less methane (and other negative externalities like NOx emissions and land use). Many efficiency measures are also inexpensive (read: break-even) to implement.

But when it comes to the increasing global demand for meat, dairy, and wool products going head-to-head with 8-year out methane cut off regulations, efficiency isn’t enough. Enteric emissions need a true silver buckshot to eliminate CH4 from business-as-usual production in the short term. (Bullseye, anyone?) [Note: the livestock industry has significant systemic problems outside of methane emissions which disruptive tech like alternative proteins and regenerative agtech more directly address. More in takeaways below.]

Absolute enteric methane reducers are in business to be the equivalent of plugging leaking oil & gas wells. CH4 mitigation is the name of the game. It’s still early days for this climate tech submarket slice, though we’re already seeing some teams forming:

Feed additives: vary considerably in their efficacy and level of tech development and testing, though are similarly administered as a fractional volume of cow’s existing feed. See the helpful graphic below of the mitigation efficacy of the ten additives most researched for methane mitigation.

Natural ingredients: from witchbrew to lemongrass, garlic to chestnut, tannins to linseed, the list of natural ingredient feed additives with suggested methane-reducing powers goes on. Meta-analyses and venture-funding activity suggest the most promise in a particular strain of frilly red seaweed, Asparagopsis Taxiformis. The accidental seaweed discovery (so the story goes) led to a 2014 study which has led to a boom in research and investment activity into seaweed-fueled cow burp startups. Asparagopsis’ efficacy correlates with its high concentration of bromoform compounds, and natural ability to effectively deliver bromoform without the rumen adapting (see: Tricky Tummies). Simple? Not so fast. Asparagopsis is hard to grow and faces unique manufacturing challenges in both ocean farming and land tanks, including limited supply of seed stock, high energy requirements for tanks, underdeveloped industry for ocean farming, heavy water weight, etc. Coupling the low-margin of seaweed farming with the low-margin of the dairy/cattle industry does not make for software margins. Startups are eeking out value in different ways:

Feed additives proponents are quick to point out their co-benefits: fly abatement, improved cow health which reduces antibiotic use and therefore antibiotic resistance. But to the cunning investor’s eye, additives have a few things going for them that make them a potential venture-scale bet:

💯 high level of emissions reduction efficacy: depending on who you ask, 90%! 30%!

⏱️ short time-to-impact: the closest approach to to flipping a switch

🤫 compatible with existing practices: imperceptible change on the farm is the most important feature for a climate technology

*Tricky Tummies: Cows’ tummies aren’t easily fooled. Methanogens rule the rumen and aren’t game to give up their balance so easily. Thus, these miracle additives can quickly lose efficacy as the tummy learns and returns to its natural gassy state. Garlic and raw bromoform’s impacts, for example, rebound from near perfect reduction to imperceptible levels after just 2 weeks use. The goal is to permanently, constantly disrupt the methanogen’s 9-step process to continue mitigating.

*Toxic Tailings: Another pesky problem - some additives can be seriously toxic. Bromoform is a carcinogen (nbd!) so any traces ending up in meat or milk would naturally render the whole additive enterprise moot. (hah) This research is naturally highly debated, and evolving in real-time though trending in the bromoform bio-additive producers’ favor.

Plugging into the value chain

The cattle value chain is a tightly run mathematical operation optimizing for weight, size, and yield, with only a few key entry points for feed additive startups to make a play. The value chain starts with the ranchers, who raise cattle until they become big enough to enter the feedlot (think massive animal feeding operation), before being slaughtered and processed into meat by meatpackers (typically the big 4: JBS, Tyson, Cargill, National), then onto the shelves and plates of supermarkets, food service suppliers, and restaurants.

Companies at the end of the value chain are closest to the customer and therefore bear the brunt of the low-carbon pressure. If a retailer agrees to offtake low-carbon beef or dairy, they can have the demand pull-through to request their suppliers adopt certain feed additives to claim the methane reduction benefits on their Scope 3 report cards - which is a version of insetting. This is particularly useful in cattle value chains, where many of the major feedlots are in bed with the Big 4 and each feedlot alone could span hundreds of thousands of cattle. However, offtake agreements still shift the heavy cost burden onto the corporates, which may not be able to realize enough of a price premium to offset the feed additive costs.

Ranchers already buy mineral additives to be blended into feed products and are all ears when it comes to higher feed conversion rates (efficiency gains + methane reduction is a double whammy). There could also be an added decarbonization benefit with a decentralized production model by being able to produce closer to the animal supply chains. But ranchers really care only about the production and efficiency benefits, not the decarbonization ones. Selling directly to ranchers is also extremely challenging when they already have trusted relationships with many other parties for exploring new feed options. It’s tough to find willing buyers looking for the bleeding edge of the tech curve - especially when production efficiency isn’t the main sell.

Talk about vertical integration. The same beef industry players also have their hands up the supply chain as the largest animal feed producers, which means corporate offtake here is a double whammy on Scope 1 and 3 emissions (but corporates beware of double counting).

The carbon offsetting route is also a viable one with Verra and Gold Standard already leading the herd in developing methodologies for reduction of enteric methane emissions through feed supplements. However, the offsetting path brings up the hairy question of who gets to claim the emissions benefit. Downstream food retail brands likely won’t be happy campers if an outsider gets to reap an emissions benefit within their value chains.

Within these go to market channels, these are critical tradeoffs to consider:

Bandaid on a broken system? The argument could be made that technologies which eliminate enteric emissions enable meat and dairy producers with the continued license to operate inhumane, unhealthy, environmentally destructive operations. Pragmatists would clap back that true systemic industrial transformation takes time, and we need immediate absolute solutions (not just efficiency gains) for the CH4 that’s here and now. Despite declining demand in the US and EU, turning the tap off entirely on industrial-scale animal production is likewise unrealistic, and ignores the fact that a majority of enteric emissions come from developing countries where veganism is neither realistic, nor culturally suited. 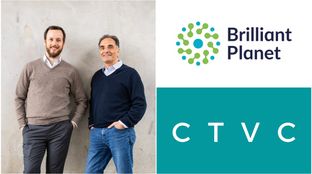 Brilliant Planet is blooming algae back