The market slowdown has officially hit climate land. 2022 funding was down 3% from the prior year as investors poured $40B+ into climate companies. But even a global slowdown isn’t slowing the rate of climate innovation - deal activity defied the odds and gained 40% versus 2021’s bonanza, with ~1,000 venture and growth-stage climate deals closed in 2022.

As the market tightens, we’ve reflected the same with our methodology. CTVC’s intention is to be the most accurate source of climate venture funding data - even as the market size retracts. The 2022 market report findings below validate your market survey sentiment and our dry powder predictions of a slower H2’22. We anticipate more, smaller deals, continued diversification into emerging climate technology sectors, and specialization as the mid and growth-stages stay dry into the new year.

🪜 A tale of three stages: while the Growth stage dropped, the Middle of the market flattened, and (Seed, Series A) Early stage activity accelerated 61%+

📉 Round sizes were smaller at every stage, with sharper 30%+ declines in Later-stage

📈 Meanwhile, deal count grew ~40% up and to the right across every industry

💨 Carbon and Built Environment are emerging stars, multiplying 2.4x and 3.8x in funding respectively since 2021

🌱 Specialist investment firms led the most deals in their respective industries

A important note on methodology

As we always say, climate tech is a theme not an industry - but even themes must be defined in pursuit of rigor. Our methodology for defining climate tech comes with two filters: 1) climate impact and 2) climate vertical. Companies must tick the box in at least one category for both filters in order to make the cut.

Climate impact: Climate tech companies must fulfill one or more of the below “climate impacts”

Climate vertical: In addition to having climate impact, companies must categorize into at least one of the 7 broad climate verticals below (skip to the end for a full definition). These verticals encompass 60+ sectors and 250+ technologies helping us mitigate, adapt, monitor, remove, and regenerate to our warmer and weirder world.

Now, without further ado, let’s get down to the data.

Subtle changes underlie the story of slow but steady diversification away from “clean tech” industries (63% of total count into Food & Land Use, Energy, Transportation) and towards fast-growing emerging innovation areas like Climate Management, Built Environment, and Carbon.

Zooming in on quarterly performance

The bigger, the better?

Who are the climate tech VCs?

⚡ Energy - The electrons and fuel that power us

🚗 Transportation - The movement of people and goods

🌾 Food & Land Use - The nutrients and resources that give us life

🏭 Industry - The goods and raw materials we use every day

🛰️ Climate Management - The data, intelligence, and risk associated with a changing climate

🏠 Built Environment - The places we live and work

💨 Carbon - The avoidance and removal of emitted carbon

***Note: Please note that some of our numbers are larger in this update than previous editions. We constantly update the dataset to have the most accurate data possible, including adding post-dated deals. 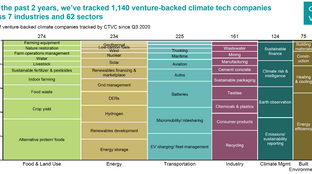 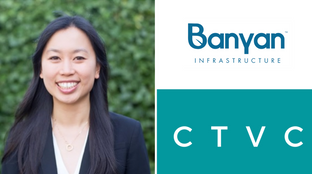